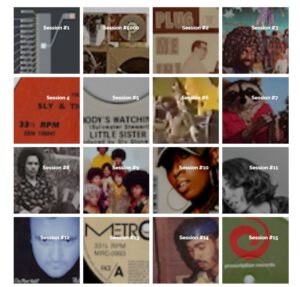 Good news: Malte Pelleters work on Drum-Machines (“Futurhythmaschinen”) has been published, as PDF in open access as well as a paperback by OLMS Publishing. A stunning book, both physically and in terms of content, with over 600 pages of stories with and about drum machines. We will talk more about that later. Because there’s even better news: Listening Sessions contained therein, along with links to the musical examples, can be found as individual modules on our ((audio)) website. The sessions allow you to do exactly what the web is good at the click, listen, and read. And what you read there is so intelligent and knowledgeable that man and woman are almost annoyed at the time spent reading web feuilletons and trendy blogs. So before opening the thick pdf book on our desktop, the Listening Sessions provide an ideal introduction. A series of trailers that are as addictive as episodes of Peaky Blinders (insert current favourite series here). So instead of Netflix, a Listening Session or two and the pandemic evening is rescued.

Where could all this be going? To the “Futurhythm Machines”, of course, this is the name of the volume about and perhaps also a bit as a homage to Kodwo Eshun’s “Sonic Fiction”. The example of several different drum machines explains almost everything about the development of drum machines and their respective aesthetic practices, their music-cultural environment, and the discourses surrounding them. The mammoth work is divided into delimited episodes, which follow a chronological order, yet never claimed that they could not tell them in other ways.

For readers, this has the advantage that it is sensible and legitimate to read the work in a self-determined sequence of thematic sections. Thus, anyone who is not interested primarily in method and theory discourse can undoubtedly place the first two chapters aside at the beginning and start with her or his favourite drum machine. It is all there, from the Sideman to the Rhythm King to the 808, the LM-1, the SP 1200 to the MPC. If you prefer the naughty version, you can read the pioneer chapter (3) on the Rhythmicon and learn about the creative algorithmic-aesthetic misunderstandings of the American avant-garde around Joseph Schillinger and Henry Cowell. In doing so, the author takes the effort to reconstruct the rhythmic signals of the Rhythmicon with the NI software Reaktor and to make them audible in Listening Session #1. Normally the words murmur reverently over these mystical rhythms, where we can listen to them and decide for ourselves what degree of mysticism we want to attribute to them on the profane-sacred scale.

However, there are also highly abysmal things in pop music, as an “uncanny digression” in chapter 5 shows, in which the spooky is identified in Sly Stone long before Mark Fisher’s Hauntology. That Sly leads the rhythm machine Rhythm King with its uncanny groove “into the bosom of the family”, makes it part of the family affair, already sounds in Listening Session #4, in Listening Session #9 it becomes a certainty (and brings an uncanny realization for all those who until then thought funk was a humane micro-rhythmic counter-model to machine uniformity). After reading a few of these episodes at the latest, it becomes clear why the book is called “Futurhythm Machines” and why it might be worth reading the remaining chapters as well. And again, Netflix is being put at risk, because whoever has advanced this far will turn the TV evening into a reading evening …